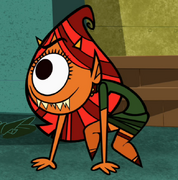 A straitjacketed Saffi doesn't care about Beezy's arranged marriage to a weevil.
Add a photo to this gallery

Retrieved from "https://jimmytwoshoes.fandom.com/wiki/Saffi?oldid=10017"
Community content is available under CC-BY-SA unless otherwise noted.