Lucius Heinous VII (nicknamed "Lucy" by Jimmy) is the tyrannical ruler of Miseryville. He resembles a devil-like creature having red skin and horns. He has great contempt for Jimmy, because of his happy-go-lucky attitude which often acts as a foil for most of his plots to make the town even more miserable. He resembles the stereotypical villain as he is cold, malevolent, narcissistic and selfish, but does have he shared moments of being a typical disappointed dad to his son, Beezy. who rebels against his wishes which he blames Jimmy for. He's usually falls flat when it comes to making new, miserable ideas and has to rely on Heloise to come up with inventions to keep Miseryville miserable.

He's a small, red demon. He has the red fur, his body is rectangular-shaped with one rounded edge, no visible hair and dark red nose. He wears a white shirt with a gray jacket, a black neck tie, dark gray pants, and black shoes.

Lucius is a sadistic, hot headed, selfish and just plain heinous dictator of Miseryville. During some flash back of when he was younger he was actually very cheerful and happy but very sensitive. Although his father made sure to get rid of them. In Night in the Heinous Museum he got mad at his father and frozen him ( but the story of how he got frozen was is always different). He hates and is terrified of Weavils (he even hates hearing that word) because they pulled a prank on him and took his stuffed rabbit when he was young and they continue to try and take advantage of him. Though they eventually make a truces in Weavil Day because they both hate Jimmy. He also dislikes any thing that has to do with fun and happy (unless it's fun and happy for him), this lead's him to especially hate Jimmy since nothing ever seems to make him miserable. He doesn't get along with his father Lucius the 6th since he treated his son like how Lucius treats Beezy, and dislikes the rest of the Heinouses. Lucius really can't stand to lose at golf. When this happens, he ends up throwing a tantrum and having the entire course flooded. This has led to Sammy helping him cheat, and his opponents letting him win. He has a 'girlfriend' named Jez who resembles a purple humanoid cat. She can barely remember his name and only goes out with him when promised expensive things but Lucius is convinced she loves him. Also, when Heloise creates a new invention, he always takes credit for creating it. Lucius has a holiday named "Lucius' Fools Day", on this day Lucius gets to spread even more misery through pranks. Lucius is basically the Devil. John Johndolf

Originally, Lucius was intended to be Lucifer, the ruler of the lucius underworld (nicknamed Lucy by Jimmy), but due to some complications they decided to make the show more kid friendly which led to Lucius' name change. However the nickname still remained. 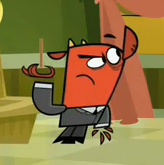 Lucy is Holding a Stick