Heloise is a super-intelligent and destructive 12-year-old girl. Her mad scientist mind and penchant for chaos are hidden behind a facade of a diminutive sweetness. She is seemingly one of the only two human characters in the show and works for Lucius by creating weapons of mass destruction.

Heloise has brown hair pulled into a ponytail and dark teal eyes. She has a long stitched scar on her forehead of unknown origin that is usually partially covered by her hair. She usually wears a red dress that terminates in a curved point. She does not appear to possess legs, they are always hidden. In one episode, Jimmy makes a reference to her "nonexistent feet". Although in Something About Herman, when she was dressed like her cousin, she is wearing pants and shoes, which shows that she does have feet.

Even though Heloise seems like she's brutal, crafty, and a bit of prank-master, Heloise has shown to have a good side to her as she can be a very loyal, considerate, kind, romantic, and a good friend. She's very sensitive when someone teases or makes fun of her and will often react with rage especially when people call her a little girl. She also appears to be quite physically strong, despite her size, and relatively fearless.

In the second season, Heloise seems more happy, cheerful, and bubbly, yet she still retains her sadistic ways. She smiles more in the second season while in the first season she was sarcastic. Her Aunt Pomegranate gave her the girly nickname in Whats Up with Heloise? Poppy is what her aunt called her.

She has a superhero identity as Trouble Bubble Girl, she wears a pink skirt with a white shirt and pink mittens. With her hair colored pink, purple glasses, pink heart-shaped earrings, wand, and a tiara. She has a scepter that blows various types of bubbles that has powers ranging from explosives to levitation. She appeared as Trouble Bubble Girl in The Terrific Trio with Jimmy and Beezy as Power Squid and Spaghetti Beezy respectively.

The depth of her crush on Jimmy is shown in the episode "Fused Together" when Dorkus discovers she has a shrine to Jimmy hidden behind a bookcase, which is triggered by pulling a lever next to it. She quickly made him forget by pulling out his brain, slapping him with it, and then throwing it away. The shrine appears again in "Best Bud Battle" and "Pet Rocky", though in the latter it's behind the fireplace. She also showed her affection in "Jimmy MatchMaker" at the grand opening of Lucius' statue. There, Heloise was whistling and trying to signal that she and Jimmy should hang out together. As usual, Jimmy failed to get the message. In the second season, she continues to attempt to get Jimmy's attention in many moments by trying to look cute to Jimmy. She even protects Jimmy like in the episode Heloise's Rival when Mean Jean challenges her to trick, scare, and harm him but Heloise doesn't want to and in the end, she beat Mean Jean and protected Jimmy from being thrown across the city. In Better Sweater she made a blue love sweater for Jimmy, it didn't work at first because he put on the fear sweater instead, but when he had it on he was totally affectionate to her and said "I can no longer hide my feelings, I adore you" so he really did admit he likes her, and he was jealous when Heloise dated Peep in Heloise's Secret Admirer.

Heloise seems to take more of a liking to Cerbee. This is probably evident in the fact that Heloise finds Cerbee cute when he was trying to tell her something in "Jimmy in the Big House". using him as a power source for the snow machine in "A Cold Day In Miseryville' and even willing to help him when it comes to love in "Cerbee In Love". It is also undoubtedly true that Cerbee likes Heloise, which is very evidently proven by the fact that Cerbee has never eaten or even tried to bite Heloise.

In "Heloise's Secret Admirer" Heloise did date Peep to get Jimmy jealous. Peep actually has an enormous crush on Heloise as is shown in his first episode "Everyone Can Whistle", he usually always attempts to flirt with her to little success whenever she's around.

Note: In some dubs, like the European Spanish and Turkish, Heloise resembles as a cute little girl with evil complex. However, in other dubs, she resembles as a grown-up teen, like in the Dutch, German and Swedish, in contrast with the original voice in English by Tabitha St. Germain 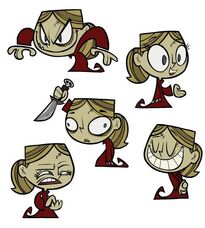 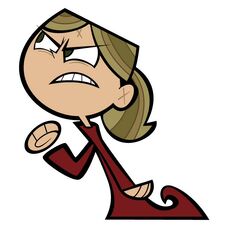 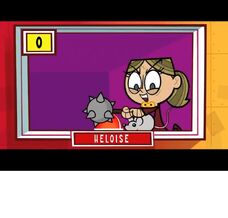 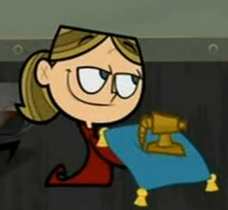 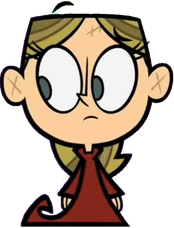 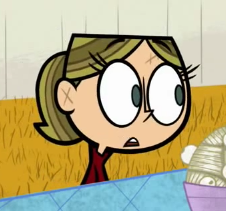 Heloise surprised in Monster Mutt
Add a photo to this gallery
Retrieved from "https://jimmytwoshoes.fandom.com/wiki/Heloise?oldid=9700"
Community content is available under CC-BY-SA unless otherwise noted.