The Fear Sweater main function makes the wearer fear Heloise or anything that resemble her.

Heloise made the sweater out of 3 three-eyed sheep with green wool after giving them bad treatment such as  putting them through all kinds of torture.

Heloise first created the sweater in attempt to frighten beezy, so he would stay away from her when she and Jimmy would hang out together, However when Jimmy and Beezy traded sweaters,because they hated the color, Jimmy began to to fear and run away from Heloise. During the first half of the episode Heloise began chasing Jimmy so she can get him to take off the sweater which he refuse. However while on a force dinner date with Beezy, Heloise convince him to wear the green sweater as she said she would dislike him a little least if he wears it, which he did and Beezy began to fear her instead, but thanks to his new fear Beezy captured Jimmy and refuse to let Heloise get near him. 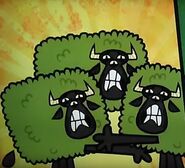 Add a photo to this gallery

Retrieved from "https://jimmytwoshoes.fandom.com/wiki/Fear_Sweater?oldid=9007"
Community content is available under CC-BY-SA unless otherwise noted.