Little is known about what the show would do with this concept other than providing mature comedy. The main sources of information for the initial premise are from concept art, rumors, and staff claims. The details herein are ones that attempt to focus on critically analyzing the concept of art and the comments of those who worked on the show.

A probable population in Hell. Notice Jimmy bringing a smile to an unhappy monster's face.
Exactly how Jimmy met his end is unknown -- but it's often believed that Jimmy was run over by a bus. Regardless of how he died, the decision of his afterlife was accidentally chosen to be Hell. As Hell is often depicted as a place of eternal damnation for very bad people, Jimmy, being an overly optimistic and innocent young boy, would be very out of place. Specifically, Jimmy would seem to be the only good and happy person in the underworlds' population.

One of his main methods of doing so is exploiting the fact that he, like the rest of the people in h**l, is 'undead'. Meaning any and all damage sustained by the cast would only inflict pain, including those which would be fatal. Should a character 'die', from their injuries, they would be brought back to life in hell. Jimmy uses this gimmick to entertain himself, and others by hurting/exploiting injuries on his body in amusing ways.

Personality wise, Jimmy seems largely unchanged from his early concept and his depiction in the aired show. There are a few noticeable differences, but most of which consists of the changes in Jimmy's attire, other than his 'undead' ability. Concept art and model sheets depict Jimmy wearing a light grey t-shirt, a dark grey bow-tie, brown slacks, and black pointy dress shoes. Additionally, no detail is present in Jimmy's ears.

Jimmy would often be seen as a nuisance to Hell's ruler: Lucifer (nicknamed 'Lucy'). As to his design, Lucy makes the underworld a place of eternal suffering and misery; those who were sent to Hell were determined to deserve punishment for their sins.

There is no knowledge of any story that was planned to structure the series. It's existence is possible, but it's likely the current show reflects what early episodes were planned to be: Miscellaneous adventures featuring graphic humur, with possible satire.

According to Edward Kay, co-creator of Jimmy Two-Shoes, and Phil Postma, original designer for the concept, the pilot was actually a six-minute non-for-air demo made and paid for by one of the investors. Originally made as an exclusive Teletoon production for the studios' tween demographic at the time, the hell references and other mature elements were removed and aged down once the U.S. broadcasters for Disney XD came on board, as they were aiming for a more conservative market. The designs we're also altered as the producers didn't like them. Although it is speculated that Charlie Schlatter was the voice of Jimmy, and Jessica DiCicco the voice of Heloise, Kay confirmed Cory Doran indeed voiced Jimmy in the demo. released in July 23, 2001. 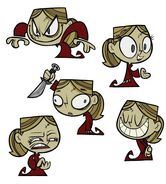 This image is seen in the February section of 2006 on his blog before the image of Heloise shocking Jimmy above in the "Scenes" section. Posted on Sunday, February 19, 2006

More characters from the pilot.

More characters from the pilot. 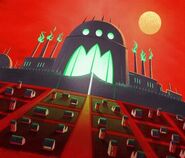 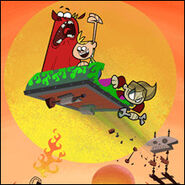 From the Early Promo. 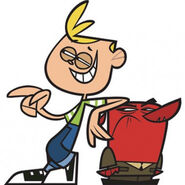 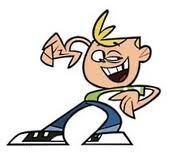 The only known picture of Beezy from the early concept.
Community content is available under CC-BY-SA unless otherwise noted.